Yes, You Can Virtualize FreeNAS

FreeNAS is the world’s most popular open source storage OS, and one of the more popular questions I get asked is, “How do I run FreeNAS as a VM?” Due to the number of caveats required to answer that question, I would typically short-circuit the conversation by recommending against it, or only recommend it for test environments since the prerequisite knowledge required to “do it right” can’t be passed on quickly. Somehow over time, this message morphed into a general consensus that “you cannot (or shouldn’t) virtualize FreeNAS at all under any circumstances”, which wasn’t my intention. So, I’m here to set the record straight once and for all: You absolutely can virtualize FreeNAS. 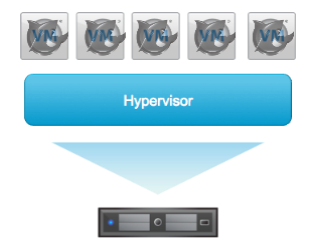 Whether you are test driving the functionality of FreeNAS, testing an upgrade for compatibility in your environment, or you want to insulate your FreeNAS system from hardware faults, virtualization can provide many well understood benefits. That said, while FreeNAS can and will run as a virtual machine, it’s definitely not ideal for every use case. If you do choose to run FreeNAS under virtualization, there are some caveats and precautions that must be considered and implemented. In this post I’ll describe what they are so that you can make well-informed choices.

Before we get started though, I should probably start with a disclaimer…

Ok, phew. Now that that’s over with, let’s get started.

When developing FreeNAS we run it as a VM. Our virtualization platform of choice is VMware, and it’s the platform in which the FreeNAS developers have the most experience. FreeNAS includes VMware tools as well.

Our second choice for a virtualization platform is CItrix XenServer. FreeNAS has no tools built in for XenServer, but you get a solid virtualization experience nonetheless. Other hypervisors such as bhyve, KVM, and Hyper-V also work, but the development team does not use them on a daily basis.

ZFS combines the roles of RAID controller, Volume Manager, and file system, and since it’s all three in one, it wants direct access to your disks in order to work properly. The closer you can get ZFS to your storage hardware, the happier ZFS is, and the better it can do its job of keeping your data safe. Things like native virtual disks or virtual disks on RAID controllers insulate ZFS from the disks, and therefore should be avoided whenever possible. Using a hypervisor, you typically have a disk on a RAID controller presented to a hypervisor which creates a datastore with a disk on it running FreeNAS. This places two layers between ZFS and the physical disks which warrants taking the following precautions.

3. Consider the Use Case

Is this a production or non-production FreeNAS application? The answer to this question has significant implications to the subsequent recommended practices.

If your use case is a test lab, science experiment, pre-upgrade checks of a new version, or any other situation where real data that you care about isn’t at stake, go ahead and virtualize. Create a VM with 8GB of RAM, two vCPUs, a 16GB install disk, and a single data disk of whatever size is appropriate for your testing, and go to town.

This is where things get serious. If you’re using FreeNAS in an application that’s relied on for daily operations, this is considered a “Production Environment”, and additional precautions must be followed closely to avoid downtime or data loss.

If you use PCI passthrough (aka DirectPath I/O), you can then use FreeNAS just like it’s installed on physical hardware. The PCI device passthrough capability allows a physical PCI device from the host machine to be assigned directly to a VM. The VM’s drivers can use the device hardware directly without relying on any driver capabilities from the host OS. These VMware features are unavailable for VMs that use PCI passthrough:

To use PCI passthrough, you need to use a host bus adapter (HBA) supported by FreeNAS (we recommend LSI controllers of the 2008 chipset variety, which are 6Gb/s and well supported in FreeNAS) as a PCI passthrough device that is connected directly to your FreeNAS VM. The FreeNAS VM then has direct access to the disks. Make sure to adhere to the guidelines on using PCI passthrough. If you use PCI passthrough, it is as if you aren’t virtualizing at all so you’ll be safe to use FreeNAS in a production scenario.

If you are still interested in virtualizing FreeNAS, pay attention to the following:

Adhere to the FreeNAS hardware recommendations when allocating to your FreeNAS VM. It goes without saying that virtualized FreeNAS is still subject to the same RAM and CPU requirements as a physical machine. When you virtualize FreeNAS your VM will need:

In this configuration, ZFS will be unable to repair data corruption but it will be resilient against pool corruption caused by damage to critical pool data structures causing loss of the entire pool. If you are using a SAN/NAS to provision the vDisk space, then three striped 1TB drives will require 3TB of external LUN usable space.

RAIDZ protection of your vDisks

In this configuration, ZFS will repair data corruption. However, you will waste an additional virtual disk worth (or two if RAIDZ2 is used) of space since the external storage array protects the LUN and RAIDZ creates parity to protect each vDisk. If you are using a SAN/NAS to provision the vDisk space, then three RAIDZ1 1TB drives will require 4.5TB of external LUN usable space.

I have attempted to share some best practices that the engineering team at iXsystems has used while virtualizing, and I hope that I have not missed anything big. With so many different hypervisors, it is difficult to give you specific instructions. You need to take some precautions to utilize your setup in a production environment safely:

Some other tips if you get stuck:

As an open source community, FreeNAS relies on the input and expertise of its users to help improve it. Take some time to assist the community; your contributions benefit everyone who uses FreeNAS.

To sum up: virtualizing FreeNAS is great—the engineering organization and I have used it that way for many years, and we have several VMs running in production at iXsystems. I attempted to provide accurate and helpful advice in this post and as long as you follow my guidance, your system should work fine. If not, feel free to let me know. I’d love to hear from you.

[---- 2018/02/27: This is still as relevant as ever. As PCIe-Passthru has matured, fewer problems are reported. I've updated some specific things known to be problematic ----]

[---- 2014/12/24: Note, there is another post discussing how to deploy a small FreeNAS VM instance for basic file sharing (small office, documents, scratch space). THIS post is aimed at people wanting to use FreeNAS to manage lots of storage space. ----]

You need to read "Please do not run FreeNAS in production as a Virtual Machine!" ... and then not read the remainder of this. You will be saner and safer for having stopped.

But there are some of you who insist on blindly charging forward. I'm among you, and there are others. So here's how you can successfully virtualize FreeNAS, less-dangerously, with a primary emphasis on being able to recover your data when something inevitably fscks up. And remember, something will inevitably fsck up, and then you have to figure out how to recover. Best to have thought about it ahead of time.

Now, here's the thing. What you want to do is to use PCI-Passthrough for your storage, and create a virtual hardware platform that is very similar to your actual physical host... just smaller. So put FreeNAS on the bare metal, create your pool, and make sure that all works ... first! Then load ESXi. ESXi will want its own datastore, and cannot be on the PCI-Passthrough'd controller, so maybe add an M1015 in IR mode and a pair of disks for the local ESXi image and datastore (you have to store the FreeNAS VM somewhere after all!). Create a FreeNAS VM and import the same configuration.

Now at this point, if ESXi were to blow up, you can still bring the FreeNAS back online with a USB key of FreeNAS, and a copy of your configuration. This is really the point I'm trying to make: this should be THE most important quality you look for in a virtualized FreeNAS, the ability to just stick in a USB key and get on with it all if there's a virtualization issue. Your data is still there, in a form that could easily be moved to another machine if need be, without any major complicating factors.

If what is described herein doesn't suit you, please consider trying this option instead.

THEME KRATOS MADE BY VTROIS